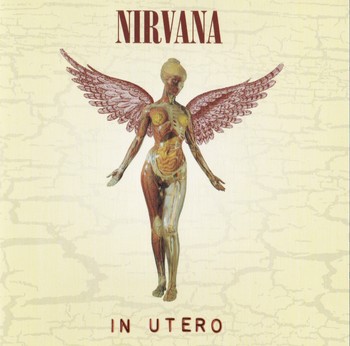 In Utero is the third studio album recorded by American Alternative Rock band Nirvana, and the last one released during frontman Kurt Cobain's lifetime. It was released through DGC Records on September 13, 1993.

It was the long-anticipated official follow-up to Nevermind, the album that launched the band into the pop culture stratosphere. In many ways, it was a desperate attempt on their behalf to return back to their abrasive roots after hitting it so big, encompassing a greater range of sounds and tones. In fact, their goal was to alienate the mainstream fans that they had inadvertently pulled into the grunge movement, such that they were convinced the album wouldn't sell a quarter of what Nevermind did.

It didn't really turn out the way they expected.

Though some were annoyed — and some reviewers even picked up on Cobain's efforts to resist his band going mainstream — contemporary reviews for In Utero were largely positive. Even with DGC's low-key promotional tactics (for one, not commercially releasing any of the album's singles in America), the album was another instant best-seller; it hit #1 again on the Billboard 200 chart in the United States and the Official Charts Company album chart in the United Kingdom, and went five-times Platinum in the US, and double-Platinum in the UK.

Three songs were released to support the album: "Heart-Shaped Box", "All Apologies", and "Pennyroyal Tea". In addition, the controversial double A-side for "All Apologies", "Rape Me", would see significant radio airplay.

After Cobain was found dead on April 8, 1994, largely presumed the result of a suicide three days earlier, touring for In Utero was cancelled alongside the American release of "Pennyroyal Tea", which only saw a German release and a UK promo handout before the recall.note The song was eventually released as a 7" in April 2014 for Record Store Day, and sold out a limited run of 6,000, placing it at #1 on the Singles Sales component of the Billboard Hot 100 for the week of May 3, 2014. The band would ultimately dissolve in the wake of Cobain's death, with drummer Dave Grohl forming Foo Fighters later that year to work out his grief. As a thin silver lining, the news of his death did contribute to a 122% increase in the album's sales several days after.

The album was reissued in 2013 for its 20th anniversary. Likely due to the widely-panned remaster of Nevermind, it was not remastered or given any extra tracks.

Trope me, trope me my friend:

All in all is all we are