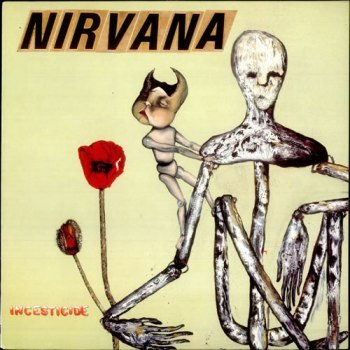 She keeps it pumping straight to my heart...
Advertisement:

Incesticide is a compilation album by Nirvana, released in 1992. It was released after the unexpected overnight sensation monster success of Nevermind from 1991. To fans who discovered the group through that album the songs on Incesticide were perceived as new, but in reality a majority of them were from EP's and B-sides from singles released between 1989 and 1992. In fact, the material was already circulating among early members of the band's fanbase, and the album simply provided easier access to them in higher quality. Originally intended to be released under Sub Pop as Cash Cow (an obvious jab at their unexpectedly quick rise to stardom), the band decided to have their recordings sold over to DGC Records (onto whom the band were currently signed) in order to give the material more exposure.

While not as famous or successful as Nirvana's actual studio albums (in part due to DGC intentionally under-promoting the album to prevent audience burnout), the album was still a critical success and a decent commercial hit, debuting at No. 51 on the Billboard 200 and peaking at No. 39, selling 500,000 copies within its first two months of release, and being certified double-platinum by the RIAA. The album additionally contains the fan favourites "Sliver" and "Aneurysm."