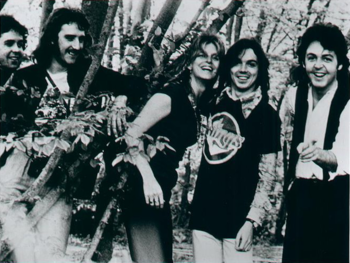 Wings in 1976. From left to right: Joe English, Denny Laine, Linda McCartney, Jimmy McCulloch and Paul McCartney.
Hypnotic Deprogammer: I did get Paul McCartney out of Wings.
Homer: You idiot! He was the most talented one!
— The Simpsons, "Burns' Heir"
Advertisement:

Wings was the first band Paul McCartney was in after he left The Beatles. It was active from 1971 to (very) early 1980. Announcements of its disbandment were released in 1981.

The band was created because, at the time, Paul didn't feel like a real musician unless he was playing with a band that he could also tour with; the name for the band came when Paul was praying during the birth of his and Linda's third child, Stella, and an image of wings popped into his head.

Wings is now considered I Am the Band for Paul McCartney, though he was in denial about it at the time — enough that many supporting band members did get the occasional song. The core members were Paul McCartney, his wife Linda McCartney, and Denny Laine (best known for this and for being a founding member of The Moody Blues, scoring a number one hit with them).

Wings was very popular in its time, in good part because Paul McCartney was in it. Wings Over America — the only complete Wings live album — was also a hot seller. It was also a successful touring band despite technical difficulties (notably Linda's singing) and Paul's reluctance to sing Beatles songs. The first Wings tour had no Beatles songs at all, even though that meant there wasn't much material to work with. By Wings Over America, there was about one record-side worth — still considered avoiding Beatles songs at the time, and much fewer than he does now, but objectively respectable when you consider how many hits Wings had between 1972 and 1976...

Linda McCartney was in Wings because Paul wanted her there. She sang back-up vocals (nearly everyone did) and played keyboards. In the beginning, she was no good at all — which was unfortunate because, even when touring random colleges in the beginning, Wings hit the spotlight. Eventually, her singing became more tolerable — at the band's peak, she was very good at Moog synthesizer. This may seem silly, but Wings used a lot of synthesizer. And the band usually used it well. Plus using a synth back then was no breeze. They were all analogue, so no pre-sets and often just getting sound was enough of a challenge.

Denny Laine was the third member, the continuity link, and the rhythm guitarist. Lead guitar was the other floating position.

The band dissolved quietly but violently in 1980. This is partly because of a drug bust in Japan that sent Paul to prison for nine days and was subsequently deported back to Europe (he got off easy)note Paul was facing a seven year prison sentence, the typical fare for marijuana posession in Japan. For unknown reasons (though his celebrity status may have had something to do with it), the authorities simply gave him a slap on the wrist instead, ending Wings's touring days right then, and partly because of personal problems between the McCartneys and Laine.

Wings had many hit singles, hitting the top of the US charts a total of five times between 1973 and 1978. Surprisingly, they reached the top spot in Paul's native Britain just once — with "Mull Of Kintyre", the best selling non-charity single in UK history.