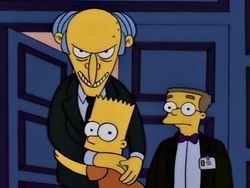 After nearly drowning in his bathtub, Mr. Burns realizes that, if he did die, there'd be no one to carry on his wealth and legacynote for those who ask, "What about Smithers?", Mr. Burns explains that his faithful assistant will be buried alive with him, since he has no childrennote at least not until season eight's "Burns Baby Burns", so he holds an audition for his next heir. When all the kids (including Bart and Lisa) lose out, Bart vandalizes Burns' house and wins a place in the old man's heart... but the more he stays with Mr. Burns, the more The Simpsons fear that Bart is becoming Burns-like.

Their latex masks are an accurate likeness, but their acting job leaves a LOT to be desired!

Their latex masks are an accurate likeness, but their acting job leaves a LOT to be desired!