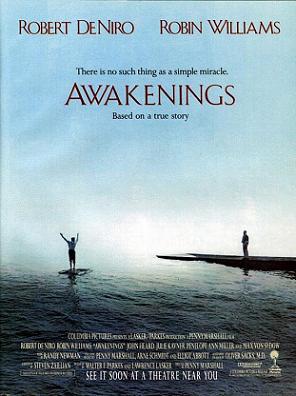 Just being awake can be a miracle.
"Hello. My name is Leonard Lowe. It has been explained to me that I've been away for quite some time. I'm back."
Advertisement:

Awakenings is a 1990 drama film based on Oliver Sacks' memoir of the same name. It tells the true story of a doctor (Sacks, who is fictionalized as Malcolm Sayer, played by Robin Williams) who, in 1969, discovers beneficial effects of the then-new drug L-Dopa. He applied it on catatonic patients who survived the 1917-1928 epidemic of encephalitis lethargica. Leonard Lowe (played by Robert De Niro) and the rest of the patients were awakened after decades of catatonic state and have to deal with a new life in a new time.

Directed by Penny Marshall, the film stars Robert De Niro, Robin Williams, John Heard, Julie Kavner, Penelope Ann Miller, and Max von Sydow. The film has a cameo from jazz legend Dexter Gordon (who died before the film's release) who appears as a patient, and a then-unknown Vin Diesel plays a hospital orderly.

The screenplay was written by Steven Zaillian, based on Sacks' book. The book was also used by Harold Pinter as the basis of his one-act play A Kind of Alaska, performed in 1982.

A documentary by the same name, featuring interviews with Dr. Sacks and his real-life patients was produced by British television company Yorkshire Television in 1974.