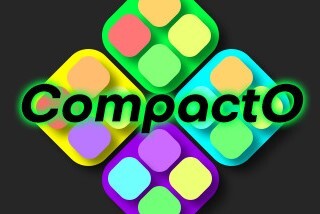 CompactO is an Idle Game by Crypto Grounds for computers running Windows and smartphones running Android released in 2021. You buy squares on a board to produce money. Once you have enough money, you can unlock shapes on a 3D realm to produce more of it on different planes. Once you progress far enough, you can earn cubes and shrink them to further boost production, buy upgrades, and potentially go even farther.