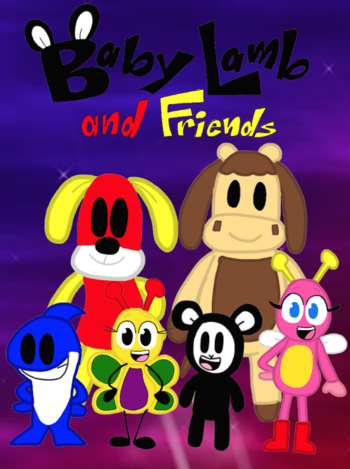 Baby Lamb & Friends is a web series created by Simon A.. It premiered on April 29, 2016, on the Baby Lamb Creations YouTube channel and currently has five seasons.

The series involves a young black sheep named Baby Lamb as well as his colorful and unique friends. His friends include his best friend Cow McMoo, sweet and bubbly Belle Butterfly, wisecracking Ricky Bowers, philosophical Donny Dolphin, and sassy Alice Pennington. All of them live in the random town of Capitol City, where they tend to get into random situations that happen. The show uses a mixture of live-action and animation as well as plush toys, "paper puppets", LEGO mini-figures, and others.

A feature-length web film based on the series, titled Baby Lamb & Friends: The Movie, was released on November 9, 2019. It's about a guy named The Dark Slayer who may look threatening but is actually a very lousy villain. So, he sets out to prove to everyone in Capitol City that he is a real villain by plotting to destroy the town and rule its people with an iron fist. Baby Lamb and the gang don't believe him until The Dark Slayer proves them wrong, takes over the town, and kidnaps everyone. The rest of the gang seeks vengeance, but Baby Lamb realizes something serious about The Dark Slayer.

All the episodes can be found here.