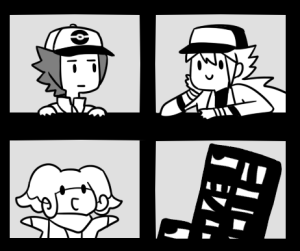 Something like a Pokémon webcomic.note Clockwise from top-left: Black, N, MissingNo., Joy
Advertisement:

Black Adventures is a Pokémon fan webcomic, mainly based on Pokémon Black and White, written and drawn by one Black. It follows the story of Black and his friends Cheren, Bel, and White. Also N.

The comic began life as a sort of "choose your own adventure" game on /vp/, 4chan's dedicated Pokémon board. Black would write the comic based on suggestions from posts with dubs (in short, posts whose numbers ended with two consecutive numbers), which helps to explain the rather nonsensical beginning of the series, which includes Black getting, of all things, MissingNo. as a starter Pokémon of sorts, and traveling back in time to save Hitler from the Allies. After two chapters of this confusion, the series begins to develop its own (and marginally more logical) plot as Black finally starts his journey to become Champion of the "New York" Pokémon League.

Now has a sequel, XY Adventures centered around a boy named Xavier and a girl named Yvonne, two fashion-obsessed teenagers who happened to be wearing the same outfit when they met. It does not end in peace.

This webcomic has examples of: