Literature / A Hat Full of Sky 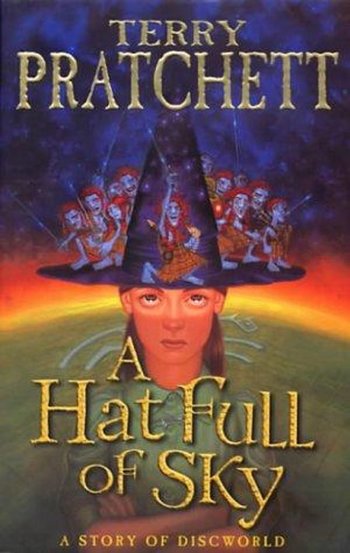 A real witch can ride a broomstick, cast spells and make a proper shamble out of nothing. Eleven-year-old Tiffany Aching can't. A real witch never casually steps out of her body, leaving it empty. Tiffany does. And there's something just waiting for a handy body to take over. Something ancient and horrible, which can't die. Now she's got to fight back and learn to be a real witch really quickly, with the help of arch-witch Mistress Weatherwax and the truly amazing Miss Level...– "Crivens! And us!" Oh, yes. And the Nac Mac Feegle – the rowdiest, toughest, smelliest bunch of fairies ever to be thrown out of Fairyland for being drunk at two in the afternoon. They'll fight anything. And even they might not be enough...
Advertisement:

The 32nd Discworld book, the third written for young adults, and second in the Tiffany Aching series.

Time has rolled on and Tiffany Aching has grown older and cleverer, but perhaps not more sensible. As far as her parents are concerned, she is off to earn a little money and see a bit of the world as an assistant to a far more experienced lady, Miss Level. And that is one-hundred percent correct. She is also going to learn witchcraft.

In addition to the politics of witches to worry about, there's the continuing support of the Nac Mac Feegle, and a mysterious force known as a hiver which is drawn to Tiffany's power, and it'll take all the effort of the Feegles, all the cunning of Granny Weatherwax, and all of Tiffany's own strength, to outwit it...

Preceded by Monstrous Regiment, followed by Going Postal. Preceded in the Tiffany Aching series by The Wee Free Men, followed by Wintersmith.