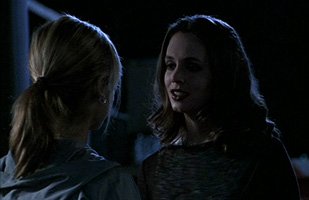 "She's not playing with a full deck. She almost has no deck. She has a three."
— Buffy Summers
Advertisement:

We're introduced to Vampire Monarch Kakistos and his colleague, Mr. Trick, as their stretch limo pulls into Sunnydale. Trick shares his good impressions of the town and their exemplary death rate, despite being predominantly white. He's considering settling here, but his companion has other things on his mind. Trick knows the drill — "kill the Slayer".

Buffy and Joyce meet with Principal Snyder, who lays out the terms for Buffy's re-enrollment. Buffy sasses him for getting overruled by the school board. Joyce steps in to smooth things over:

Giles is working on a binding spell to ensure that Acathla doesn't wake up again. He needs precise litany of how Buffy defeated Angel. Buffy blinks at the mention of this memory, but is nonchalant as she walks Giles through a heavily shortened version of the events: Buffy impaling Angel against Acathla.

Evening. The gang is chilling out at The Bronze. Scott Hope, a boy who's been eying Buffy for some time, asks Buffy to dance, but she's not ready to date again. Scott proposes that he go wait by the dance floor and that, if Buffy feels inclined to dance she can just "mosey on over." Willow points out that he's charming and normal. Oz is impressed by Scott's use of the word mosey. Buffy's attention is called to a couple on the dance floor; she makes "Disco Dave" for a vampire and closes in, but is waylaid by Scott, who mistakenly thinks she's "moseying" and wants to dance. Buffy, flustered, apologizes for the mix-up and and leaves. The Scoobies follow Buffy outside, and just as they're all ready to pounce, they find the 'victim' kicking the stuffing out of her attacker. She casually introduces herself as Faith, borrows Buffy's stake then dusts the vamp. Oz observes that there's a new Slayer in town. Back inside, Cordelia works out that Faith was called to Slayerdom after Kendra bit the dust. Willow asks what brings Faith to Sunnydale, and Faith explains that she wasn't—but her Watcher went on a retreat in England, so she decided to go AWOL and meet the infamous Buffy.

Cut to the library, where everyone (including Giles) is enamored with the Boston beauty. Willow proposes that Faith hang out with her and Xander in the meantime. Giles thinks Faith has "zest," but at Buffy's glower, he changes the subject. He asks more questions about Acathla, but after a little of this, Buffy's had enough. She says the next time she kills Angel, she'll film it.

Faith gets the grand tour. She's amused by Xander and Willow, but confides that Buffy is a bit of a pill. Scott bumps into Faith, and the pair get mingly. Buffy chooses this moment to drop in, naturally. Willow thinks that maybe Faith and Scott make a good couple. Buffy grouses that she hadn't closed the door on Scott for all time. Willow convinces Buffy to invite Faith over for dinner, she accepts.

At the Summers residence, Joyce gets to know the new slayer, and is quickly enamored with her zest for the job, to Buffy's annoyance. In the kitchen, Joyce tries to get Buffy let Faith handle all the slaying duties from now on, and go somewhere from the Hellmouth for college. Buffy declines, saying that slaying is her destiny.

The girls are out patrolling, and Faith observes that they've already covered this area. Buffy snarks that vampires sometimes go down streets even after you've checked them. ("It's like they have no manners.") Faith shrugs that Buffy knows best, as she's been doing this the longest, going on to imply that perhaps she's over the hill. Faith brings up Angel, and Buffy gets in her face. They're about to start throwing punches, but they're rudely set upon by Kakistos' henchmen. Buffy tries to get Faith's help, but a couple other vamps tackle her. Faith continues to wail away on a lone hench vamp, who mentions that he serves Kakistos. Buffy overcomes her adversaries, then stakes the vamp Faith's been beating to a pulp for the past 5 minutes. Buffy realizes Faith enjoys her job a little too much. Faith sneers that she thought Buffy could handle herself, and leaves.

Buffy gives a scathing report to Giles, who thinks she's just being catty. Nevertheless, he agrees to phone Faith's Watcher. He asks about the vamps, and Buffy mentions that one of them said something about living for "kissing toast." Giles filters through the Buffy Speak and realizes she means Kakistos, which is the name of a vampire so old that his hands and feet are cloven. Buffy notes that Kakistos' arrival coincided with Faith's. Giles gets off the phone with some stark news: Faith's Watcher is dead.

A Fleabag Motel. Buffy turns up in time to see Faith arguing with the manager and begins asking questions about Kakistos. At hearing the name, Faith immediately starts stuffing clothes into her suitcase. Somebody knocks; Faith peers through the peephole sees the manager again. She opens it to find that the manager is no longer among the living, and being held like a dummy by Kakistos. Buffy grabs Faith, and together they barrel out the bathroom window. In an abandoned building nearby, Faith (on the verge of tears) spills the story that she saw Kakistos kill her Watcher, and she ran. Buffy thinks they can take him, but Faith resumes her freak out when she realizes they've been railroaded into Kakistos's lair. Buffy fights off a couple of mooks, but Faith is frozen with fright in the presence of Kakistos. Mr. Trick arrives on the scene, and remarks to a hench vamp, "If we don't do something the Master could get killed. ...Well, our prayers are with him." They skedaddle. Buffy manages to drive a stake into Kakistos, but master vampire barely feels it. As he crows in triumph, suggesting Buffy needing a bigger stake, Faith picks up a giant pointed crossbeam and reams Kakistos with it. The battle over, Buffy asks Faith if she's hungry. "Starved," Faith replies.

The next day in the library, Buffy spills her Dark Secret: Willow's restoration spell cured Angel just moments before Buffy was forced to kill him. Willow and Giles stare dumbly. After she leaves, Willow asks for permission to help Giles with the binding spell, but he admits, "There is no spell." He exits, leaving Willow to contemplate what he did for Buffy, and why.

Buffy accosts Scott. She explains how "there used to be someone" but that it's all over now, and would love to go out with him if he's still interested. Scott answers without much conviction that he'll need to think about it. He walks a few paces, turns, and rushes back.

"You know what, I've thought about it and I'm in; when do you want to go?"

Buffy says she's got something to do tonight, but after that she's free. At nightfall, Buffy resolutely returns to the mansion, says her goodbyes to Angel, and lays her claddagh ring on the floor. Once she's gone, a bright light emanates from the ring, and in a flash, a naked, feral, twitching figure falls to the ground. It's Angel.