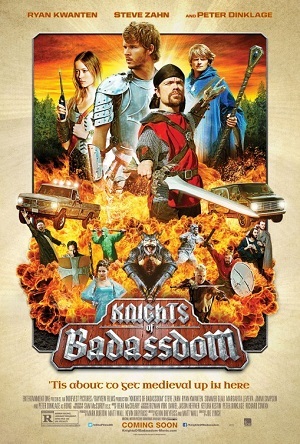 Knights of Badassdom is an independent film from Joe Lynch that focuses on the world of LARP. It features an Ensemble Cast culled from Sci-Fi and geek culture, featuring Ryan Kwanten and Steve Zahn, with supporting roles from Summer Glau (Firefly), Danny Pudi (Community), and Peter Dinklage (Game of Thrones).

Joe (Kwanten) is a complacent homebody who is a classic car mechanic by day, wannabe Doom Metal singer by night. Sick of his lack of accomplishment or drive, his girlfriend Beth dumps him. Joe returns to his home (shared with millionaire friend Eric (Zahn), and gets drunk and high, but his friends Hung (Dinklage) and Eric have another idea — drag him along to their LARP game this weekend and take his mind off of her.

At the event, Joe (who is something of a legend among the LARPers for a past RPG success against the event's game master, Ronny) meets Gwen, a blisteringly attractive young woman who plays in the LARP guild in order to chaperone her cousin Gunther, who is always in "game mode". Circumstances lead to Joe and Gwen spending a lot of the movie traveling together.

During the game, Eric uses his prop book as part of a game spellcasting, but unbeknownst to him, his book is more than a prop. Long story short, his seemingly farcical incantation actually summons a demon, who takes on the form of Beth, Joe's recent ex, and begins to slaughter LARPers one by one. As the main characters start to realize something isn't right in Evermore, they struggle to figure out what has happened, how to stop it — and how to do it before all the other players get up the next morning for the game's epic Final Battle, which is destined to become a lot more epic.