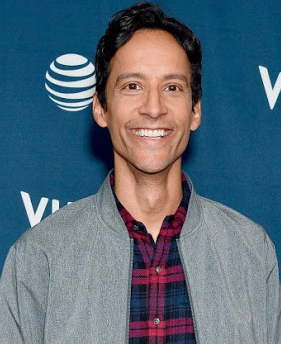 Daniel Mark "Danny" Pudi (born March 10, 1979 in Chicago, Illinois) is an American actor of Indian and Polish descent. He started out doing improv in Chicago before moving to Los Angeles to pursue acting. He is best known for the role of Meta Guy Abed Nadir on Community. He's currently a part of the main cast of Mythic Quest, and was one of the lead voice actors on DuckTales (2017).

Due to being heavily associated with his role on Community, he occasionally takes the time to remind his fans that he and Abed aren't the same person: while Abed is a socially awkward twenty-something geek obsessed with popular culture, Danny is a Happily Married husband and father known for his athleticism and his love of sports (he's an avid marathon runner, among other things), and he was in his 30s throughout Community's run.