Film / The Pretty One 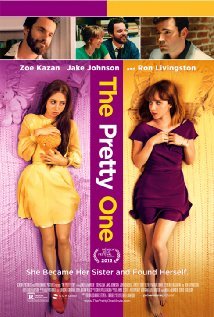 The Pretty One is a 2013 Dramedy film directed and written by Jenée LaMarque. The film stars Zoe Kazan, Jake Johnson, Ron Livingston, Sterling Beaumon and John Carroll Lynch. Laurel and Audrey are identical twin sisters who grew up in a small town. After their mother died, Audrey went off to the city to become someone new and exciting and Laurel stayed to take care of their father. Audrey comes up with a plan for Laurel to come back to the city, and learn who she is. After a car crash, only one twin survives, but with retrograde amnesia, and is identified as Audrey based on the pendant she was wearing.

On the morning of her own funeral, Laurel realizes that she is the one who survived the accident, but decides to assume Audrey's life, since everyone seems to have loved Audrey more. Soon, she is living in the city, struggling to try to take up Audrey's life and also struggling with the attraction she has with Basel, the tenant on the other side of her duplex.