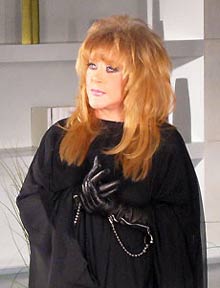 Alla Borisovna Pugacheva (Russian: Алла Борисовна Пугачёва, born 15 April 1949) is one of the most famous Soviet and Russian singers and actresses in the world. She began singing in 1965, and was briefly a member of the ensemble "Youth." Her first big hit was in 1975, with the song "Harlequin." She was the singing voice of Nadia in the classic comedy / drama The Irony of Fate, for which she sang several songs. She later starred in the 1979 musical The Woman Who Sings, a semi-autobiographical film whose soundtrack sold 55 million copies. She went on many international tours and, in the 1990's, launched a magazine, radio station, perfume, line of shoes, and even a brand of potato chips, all named after her. In 2009, after her 60th birthday, she announced that due to age and worsening health, she will perform a farewell tour and then retire from singing.

Her personal life has been extensively discussed in public, notably her many relationships. Her partners have included circus performer Mykolas Orbakas (father of her daughter Kristina Orbakaite), director Alexander Stefanovich and pop singer Filipp Kirkorov, whose own career she boosted. She is still considered the Russian prima donna, and her "colleagues" are Sofia Rotaru and Roza Rymbaeva.