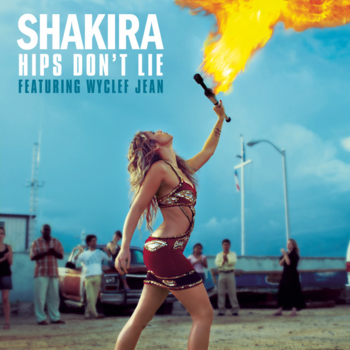 "Hips Don't Lie" is a single by Colombian artist Shakira. It is based in salsa and cumbia and was released in 2006 as the third track of the reissue of Oral Fixation Vol. 2 (2005).

It samples both Wyclef Jean's 2004 song "Dance Like This" and Jerry Rivera's "Amores Como El Nuestro" with borrowed lyrics from the former originally adapted from Luis Dias' "Carnaval (Baile en la Calle)". Many of the song's lyrics are, however, original and written by Shakira.

"Hips Don't Lie" was for a decade ('06-'16note Though it was still selling about a million copies a year after this) the world's best-selling single of the 21st Century and is at least popularly renowned as the world's biggest pop song ever, certainly for the 2000s and 2010s. The music video, released in 2006, was shared on YouTube and held the top spot of most-viewed video until around February 2007. The song also reached the number #1 spot in over 25 countries, the United States of America included, breaking the record for the most radio plays in a single week and being both Shakira's first US and UK Number 1 (pub quiz question: its status as UK Number One meant that it was the last song ever to be played on Top of the Pops). It has won the People's Choice Award as well as the MTV Latin American Music Video Award and the MTV Music Video Award in the same year.

It is considered a World song and is Latin Dance and Pop Latino in genre; it has been named the 8th top party song of all time. In the UK it broke the record for most weeks at number 1 during a second run: it spent only one week at the top spot but then returned again for a four-week run two months after its initial chart-topping before Beyoncé knocked it off. This record has never been broken and is currently shared with Gotye ("Somebody That I Used To Know"). It stayed in the charts for a whole year.

If you needed an update on just how popular the song and music video remains, it was the most tweeted about song and video in the week beginning 1st September 2014 — nearly a decade after it was released — beating out fierce contenders such as Taylor Swift with "Shake It Off". It was also included in the popular game Just Dance 2017, over a decade after release.

Like many of her songs, Shakira wrote and released a Spanish version, this one called "Será, Será (Las Caderas No Mienten)"note Also sometimes called simply "(Mis) Caderas No Mienten" - (my) hips [they] don't lie - for some reason.