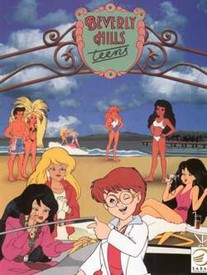 Girls, Glitz, Glamour.
"Come live your fantasy in Beverly Hills
Come on and make your dreams come true.
And there's a teen club in Beverly Hills
So many things that we can do!
FUN FOR ME AND YOU!"
—Expository Theme Tune
Advertisement:

Ever wondered what Beverly Hills, 90210 (which this show predates) would be like if it was animated and didn't take itself so seriously? Well that actually happened. Actually, aside from the city and the teenagers, this show didn't have much in common with that other show. This has far more in common with Richie Rich, a kid-friendly version of Dynasty (1981), and the fun, excessive side of The '80s: Being rich, popular, and totally radical. Just about everything of that decade was featured on that show, as long as it was G-Rated. But that still left room for a lot.

What was it about? Well, it's about teenagers living in Beverly Hills. The show was almost a Sitcom with a very thin plot. Basically, it's better to just understand the characters.

Take those characters, and mix and match with any appropriate Sitcom plot you can imagine, and you get a show that's more enjoyable than it has any right to be.

In 1989, repeats of BHT were teamed with a new series, Maxie's World, and reruns of It's Punky Brewster to create an Animated Anthology, which many independent and Fox stations aired in weekday afterschool time spots. The Maxie's World package lasted one year in terrestrial syndication, and reached new audiences when aired on The Family Channel from 1993-1998.

A Time to Remember

A Time to Remember