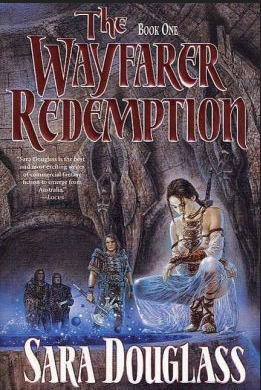 In a World… of all kinds of incest, we follow our protagonists on an inspiring, at times horrifying, and at times depressingly morally gray adventure. In this case, adventure means everyone had a crappy as hell day. Our first protagonist is Axis SunSoar, who is a member of a military order called the Axe Wielders, which is a part of a religion called the Way of the Plow. The leaders of such, the Brothers of the Seneschal believe that The Forbidden who live in the north are evil, nasty monsters, The Heartless at their finest. There is even a recorded history showing the tyranny and evil of the Forbidden. After a glorious revolution, the Seneschal overthrew their dark masters and sent them into dark forests and mountains...

All of that little story was a lie.

The Forbidden are really decent people, but one group of them, the Icarii, have wings, and the Avar have horns. They have magic music. And that glorious revolution was a Moral Event Horizon crossing for the Seneschal, who chopped down whole forests of habitats for the Avar and all 'round every human in those "glorious" wars of the axe were bastards. Nowadays, Axis is slowly learning his secret past. After assuming leadership of his new people, he has to fight his evil half-brother Borneheld, and uncover mysteries such as about WolfStar, a heretic Icarii combo platter of the Magnificent Bastard, Complete Monster and Mad Scientist tropes. And, of course, deal with the Big Bad, another evil half-brother. This one is called Gorgrael, and he has an absolutely lovely prophecy to go with him.

Originally from Australia, where these were two separate book trilogies. In America TOR merged them into a six book saga.

The sequel series to The Wayfarer Redemption is The Darkglass Mountain Trilogy.