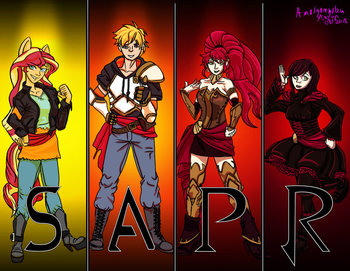 Cover of the first part by Mix-Up 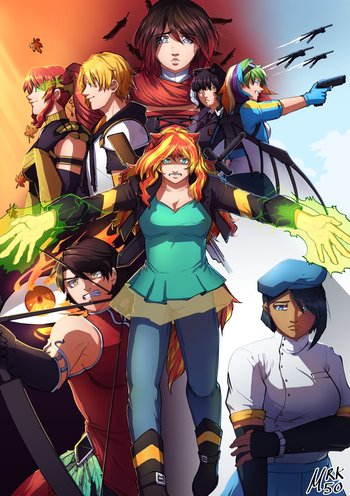 Cover of the second part by MRK50

SAPR by Scipio Smith is a crossover between My Little Pony: Friendship Is Magic and RWBY available on Fanfiction.net

Sunset Shimmer wanted power, she wanted to be adored, she wanted to claim that which Princess Celestia had denied her. What she got when she stepped through the mirror to another world was being a faunus in Atlas. Now she sets her sights on Beacon to finally claim the fame she so craves.

Pyrrha Nikos was burdened by her legacy, and by her success in the gladiatorial ring. Since the day she could walk she has been trained to be the world’s greatest fighter, and she has never lost a fight. Now she is making a choice for the first time in her life, and she is choosing to go to Beacon, for the possibility of failure it brings is surely better than a destiny she did not choose for herself.

Ruby Rose was the quintessential huntress, born into a family of huntsmen. Selfless, kind, and almost supernaturally pure of heart, she never had nor wanted any choice in what she wanted to do with her life. When the headmaster of Beacon offered her the chance to join two years early she took it, for joining a Huntsman Academy was the only logical path for her to take.

Together, these four different individuals will form Team SAPR (pronounced as Sapphire), and though their start is rocky, they’ll go on to have many adventures together. Along the way they’ll find friends and allies among their classmates, their teachers, and in the powerful Atlesian military. They’ll also come to face off against dastardly villains with terrible goals. Life would be easy if it was just that, but along the way the lines of friends and foe got a little blurry.