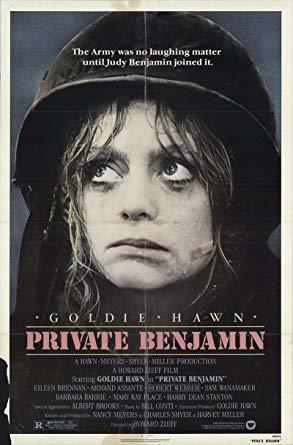 Private Benjamin is a 1980 American comedy film starring Goldie Hawn. The film was one of the biggest box office hits of 1980, and also spawned a short-lived television series.

A Jewish American Princess, Judy Benjamin (Hawn), is devastated when her husband (Albert Brooks) drops dead on their wedding night. While she grieves a duplicitous recruiter for the Women's Army Corps convinces her to enlist. Judy thinks her enlistment is like a vacation but Captain Lewis (Eileen Brennan) quickly dashes her hopes of an easy time. As Judy goes through basic training like any other grunt, she becomes a good soldier and develops a sense of self-esteem.

Tropes used in Private Benjamin include: