Film / The 7th Voyage of Sinbad 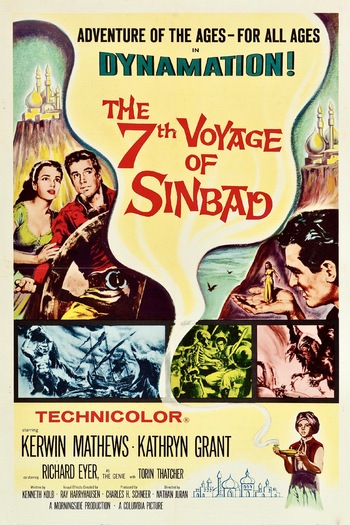 The 7th Voyage of Sinbad is a 1958 adventure film directed by Nathan H. Juran and featuring Kerwin Mathews as Sinbad the Sailor, but starring Ray Harryhausen's stop-motion monsters. Despite the title, the film's plot actually incorporates elements from Sinbad's third and fifth voyages, as well as a scene straight out of The Odyssey.

Legendary adventurer Sinbad the Sailor and his crew discover the fantastic island of Colossa. There they encounter Sokurah (Torin Thatcher), a magician who owns a magic lamp, but loses it while escaping from a giant Cyclops and is desperate to get it back. When he fails to entice Sinbad into helping him fight the Cyclops, Sokurah concocts an evil potion to shrink Princess Parisa (Kathryn Grant) , Sinbad's fiancée, down to the size of a mouse. With the only known antidote requiring the eggshell of a roc from Colossa, Sinbad has no choice but to go back with Sokurah to the island if he is to save Parisa.

This was the first feature film using stop-motion animation effects to be completely shot in color.

It was nominated for the 1959 Hugo Award for Best Dramatic Presentation. Harryhausen would work on two more Sinbad films with different casts and crews, The Golden Voyage of Sinbad and Sinbad and the Eye of the Tiger .

The 7th Voyage of Sinbad provides examples of: