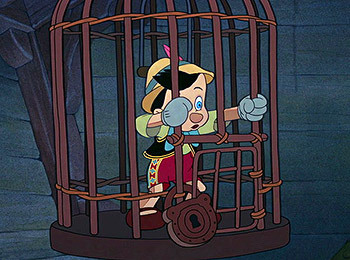 Do I look like I have wings and a beak?! Okay, fine, I guess I have the beak part down...
"This will be your home, where I can find-a you always!"
— Stromboli, Pinocchio
Advertisement:

It appears The Hero has found himself captured. But where would the evil overlord put him? Seems a regular prison isn't around or just wouldn't do.

So the bad guy sticks The Hero in a birdcage. This is usually done both to legitimately keep him locked away and to taunt him. On some occasions, the animal may be kept in the cage with the hero. Note that it doesn't necessarily have to be a birdcage, but is the most common form of this trope.

Another common invocation of this trope is when the Team Pet is captured along with the hero. The hero will usually be placed in a normal prison while the Team Pet is confined in the birdcage. If the pet is left outside altogether, Pet Gets the Keys may occur.

This becomes even more common when a character is shrunken or otherwise much smaller than their captor(s).

May overlap with Caged Bird Metaphor. Not to be confused with Gilded Cage, which is not literal.