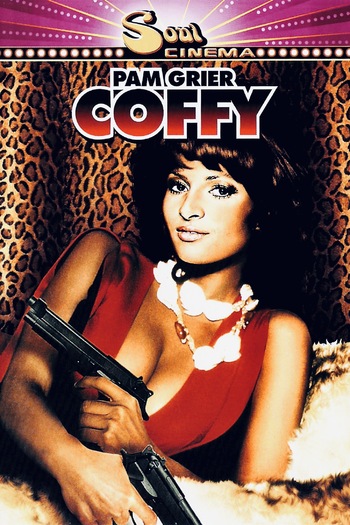 Badassery, thy name is Pamela Grier.
"Pam Grier was white America's first opportunity to get an eyeful of a really fine black woman without having to listen to her sing, thus empowering millions of us to ignore Destiny's Child. If you don't appreciate the importance of that I guess you weren't around back in the Lena Horne Era. You never heard Pam Grier wail about no 'Stormy Weather'. If it was raining outside that meant it was time for Pam to put on her baddest pair of rainboots and go out there and kick that weatherman's white ass."
— John Saleeby

Pamela Suzette Grier (born May 26, 1949 in Winston-Salem, North Carolina) is an American actress, known for being probably cinema's first Action Girl. Any time you see a woman kicking ass in movies, you can thank her. She was voted the second greatest such actress of all time by Rotten Tomatoes (behind Michelle Yeoh).

In the 1970s Grier was an icon of Blaxploitation movies and many of her best-known films belong to that genre. It came as no surprise that she starred in Quentin Tarantino’s 1997 homage to Blaxploitation, Jackie Brown.