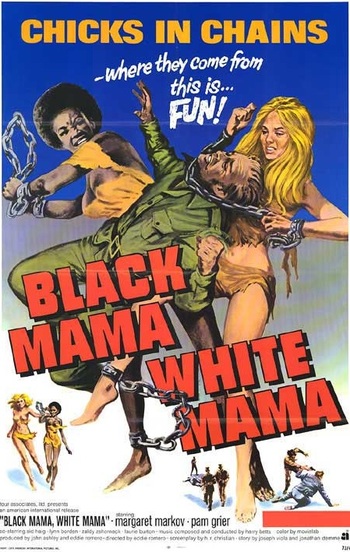 Please notice who gets top-billed in the credit block.
Advertisement:

Black Mama, White Mama is a 1973 Exploitation Film from American International Pictures, starting as a Women In Prison film and then following the escape of two prisoners and the ensuing womanhunt. It stars Pam Grier as Lee Daniels and Margaret Markov as Karen Brent. Lee robs Vic, her big shot drug dealer/pimp/boyfriend, and ends up in jail. Meanwhile, revolutionary Karen is arrested for smuggling weapons for the guerilla. The pair escape and don't get along at first (especially since they are chained together but want to go in opposite directions). Later they do.

While the movie has a classic plot about hunted fugitives being hunted by corrupt officials and various criminals, and has plenty of action scenes, it also excels in various kinds of Fanservice, with lots of nudity.

Pam Grier and Margaret Markov teamed up again in the following year's The Arena (for New World Pictures), which also involved action, fanservice and breaking out of captivity.

The story was co-written by a young Roger Corman protege named Jonathan Demme.