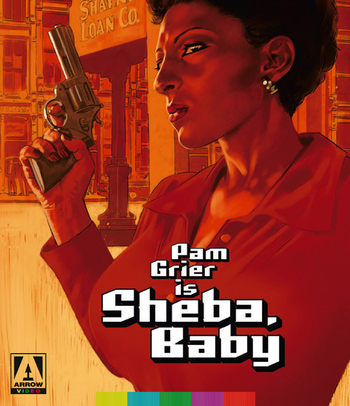 Sheba with her favourite weapon
Sheba, Baby is a 1975 Blaxploitation film starring Pam Grier as Sheba Shayne, a Chicago P.I. and ex-cop. When her father's loan business in Louisville, KY, becomes the target of a mob takeover, she is called back to her old town to help. Her father is more or less accidentally killed when the bad guys are trashing his office. Getting little help from the police, Sheba decides to take the law into her own hands.
Advertisement:

First she takes on the local crime boss, Pilot, who is directly responsible for her father's death, and then she goes for the Big Bad, Shark.

The movie follows the same mold as her earlier works Coffy and Foxy Brown, but is considerably tamer, with not so scary criminals, almost no sex or nudity, and (somewhat) toned-down violence.