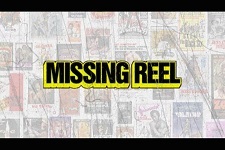 Missing Reel is a 2014 six-episode Web Video series on YouTube that explores the histories of different Exploitation Film genres. It is available here

Missing Reel contains or discusses examples of the following tropes: