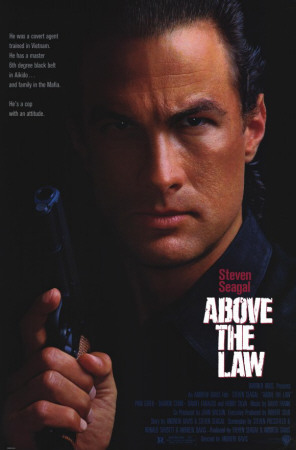 "You guys think you're above the law. Well, you ain't above mine."
— Nico Toscani
Advertisement:

Nico Toscani (Seagal) is a Chicagoan of Sicilian descent who, at a young age, developed a fascination with martial arts and trained in it in Japan for several years before being recruited into the CIA and serving a tour in Vietnam. There, he made an undying enemy in the form of Kurt Zagon (Henry Silva), an interrogator who used the Vietnam war as an opportunity to make money in the drug trade, and after a scrupple between them, Nico left the CIA and returned to Chicago, wherein he got married and became a cop. Now, Nico and his partner Delores "Jax" Jackson (Pam Grier) have got information about an upcoming drug deal involving Salvadorian drug dealer Salvano. Upon and after busting it, however, several peculiar things happen. First, the deal, instead of drugs, turns out to involve plastic explosives. Then, Salvano and all others that were arrested are mysteriously pardoned by the government and let free. Then, a bomb is detonated at Nico's church, with the apparent goal of assassinating a priest. Then, Nico's status as a cop is removed and he is told not to stick his nose into things. What's going on? Could it all, by chance, be a part of Zagon's schemes to fund an invasion of Nicaragua and assassinate a senator who's trying to stop him?

Not to be confused with the rap group or the 2017 Belgian-French film of the same name.