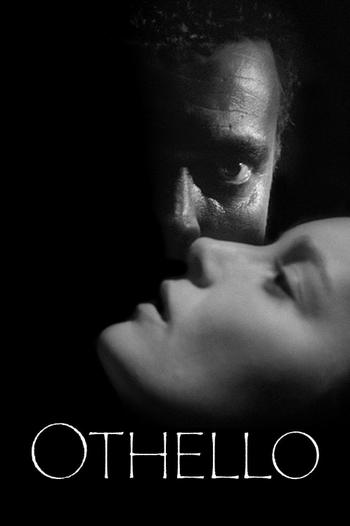 Othello is a 1951 film directed by and starring Orson Welles.

It is, obviously, an adaptation of William Shakespeare's Othello. Othello is a Moorish (read: black) general in medieval Venice. Although the townsfolk respect him for his military prowess, they are shocked when he marries a white woman, Desdemona, daughter of wealthy Brabantio. Brabantio accuses Othello of seducing his daughter by witchcraft, but when Othello recounts their romance and Desdemona proclaims her love, Brabantio begrudgingly backs down.

Although he does not know it, Othello has a far more serious enemy in Iago, an ensign in the army Othello commands. Iago hates Othello for promoting another officer, Cassio, above him to the rank of lieutenant. While professing to be Othello's trusted friend, Iago plants seeds encouraging Othello to believe that his wife, Desdemona, has cheated on him with Cassio. Thus a plot is set in motion which will destroy them all.

Othello was the start of the "scrounging for money" phase of Orson Welles' career (sadly followed by the "unable to find money" final stage). Photography lasted for nearly three years as Welles cadged money wherever he could find it and took film roles (including in The Third Man) in order to get more cash. A murder scene is set in a Turkish bath because the costumes that the actors were supposed to wear were repossessed. When acting in a 1950 film called The Black Rose Welles demanded a fancy mink-lined coat for his character; he stole it from the set and wears it in this movie.