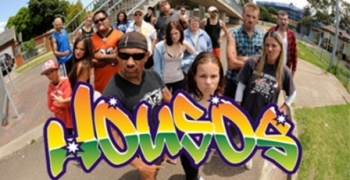 Just a mob of typical 'Strayans.note Translation: Just a group of typical Aussies.

A show about one of the most feared and hated elements of Australian society... bogans. In fact, Housos is something of an affectionate portrayal of Australia's working-class bludgers (i.e. the working-class who don't work). The title comes from Australian slang for those who live in the government's Housing Commission's public housing. Created by Paul Fenech, it has his hallmark tendency to take ethnic or class stereotypes and send them hurtling through the roof. Despite its heavy basis in outrageous satire and parody, two current affairs programs aired 'exposés' on this offensive new "Reality Show", which only helped boosting its publicity.

Started airing October 2011 on SBS. A movie of the series titled Housos vs Authority was released in 2012. A sequel that crossed over with Pizza later debuted in 2014.