Film / The Hand That Rocks the Cradle 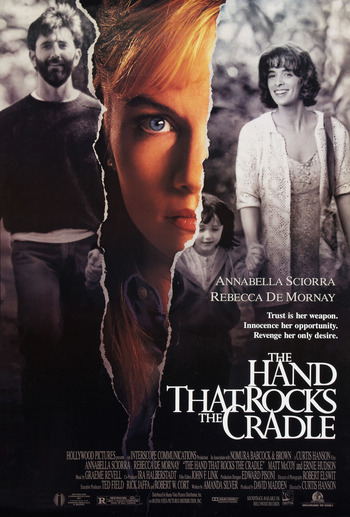 The Hand That Rocks the Cradle is a 1992 thriller film directed by Curtis Hanson and written by Amanda Silver (Rise of the Planet of the Apes, Jurassic World). It centers on a vengeful nanny who schemes to destroy a naïve woman and steal her family from her.

Claire Bartel (Annabella Sciorra) is pregnant with her second child. At a routine checkup, Claire is molested by her new obstetrician, Dr. Victor Mott (John de Lancie), and after Claire tells her husband Michael (Matt McCoy), the couple decide to report the incident to the authorities. Four more women come forward to corroborate the Bartels' story, and Dr. Mott commits suicide to avoid being arrested.

Dr. Mott's pregnant widow (Rebecca De Mornay) ends up losing their child from the stress of her husband's suicide as well as the ensuing financial fallout. Blaming her for her woes, Mrs. Mott vows revenge against Claire. Six months later, she begins going by the alias "Peyton Flanders", with Claire and Michael hiring her to be their two children's nanny while unaware of her true identity. From that point on, Mrs. Mott covertly works to destroy the Bartel family.