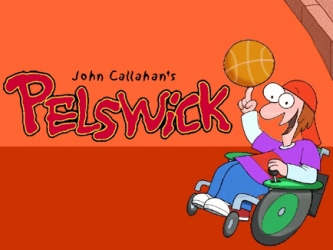 Created by (but not directly based on the cartooning of) quadriplegic American cartoonist John Callahan, Pelswick was a Canadian animated series produced by Nelvana and animated by Suzhou Hong Ying Animation. In its home country, it was shown on CBC Television for two seasons and 26 episodes. In the United States, it aired on Nickelodeon from 2001 to 2003, and the Nick on CBS block from September to November of 2002.

The show was about Pelswick Eggert, a 13 year old boy who struggled with the average problems that 7th Graders have, such as trying to decide between impressing a girl and going with his gut feelings, and dealing with bullies, while also being in a wheelchair.

In most episodes, Pelswick would have to learn An Aesop from his Guardian Angel, Mr. Jimmy. No matter what the Aesop was, Pelswick would usually not get it until the very end of the episode.

In 2004, a poll on FUNimation's website revealed that they held the DVD rights to Pelswick. They didn't end up releasing any episodes on DVD, likely because of low interest. The show is available for free streaming on Tubi TV, who also streams a bunch of other shows from the Nelvana library.