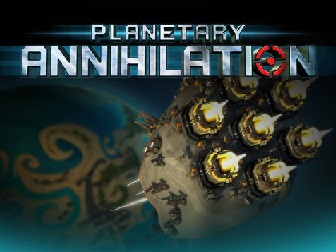 Planetary Annihilation is an RTS set IN SPACE! Created by Uber Entertainment and funded by Kickstarter, it follows factious robots in their separate (and conflicting) quests to conquer the galaxy. Players have control over all robots in their army and can build an empire across multiple star systems.

As you might guess from the title, it's another Spiritual Successor to Total Annihilation (the other being Supreme Commander), this time on a galactic scale. Not being limited to just a single planet's surface like in its spiritual predecessors, players can now build and deploy armies across multiple planets in a single map.

A standalone expansion with the subtitle Titans was released in August 2015.