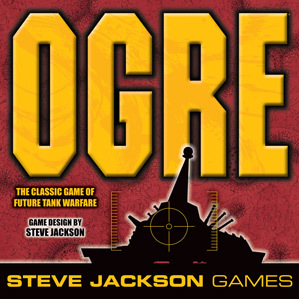 It was very close now. Had the command post had windows, the men inside could have seen the explosions. The Ogre was moving very slowly now, but two guns still spoke. It no longer dodged; it was a juggernaut, coming straight for its target...
Advertisement:

First released in 1977, OGRE is a hex-map tactical wargame designed by the legendary Steve Jackson. The premise is simple: a single cybertank (the titular Ogre) versus a weaker but more numerous sci-fi army. If the cybertank destroys the Command Post, it wins. If the cybertank is destroyed, the defending army is victorious.

While this sounds like a unfair match, consider that the Ogre is more than up to the challenge. Think later model Bolos without the self-awareness, and you pretty much get the idea of powerful it is.

Over time, the game developed its own universe and spin offs such as G.E.V. (focusing on conventional units instead of the Ogre), its own GURPS supplement, a miniature game, and even some computer adaptations. It made a return in 2013 with the Designer's Edition, funded using Kickstarter and generating way more than the original goal. Oddly enough, the base 6th edition was not released until 2016.

Two videogames have been made: one in 1995 and the most recent was released on October 2017 after being funded as a stretch goal of the Designer's Edition Kickstarter.

The OGREs themselves use the following tropes:

The Ogre rolled on...