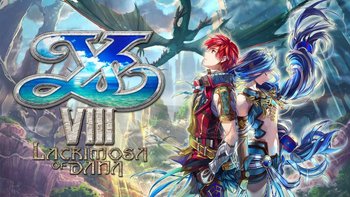 "We are not the tools of any higher power. Each of us is the very embodiment of free will. Even so, there comes a time in every man's life when he must answer a call to destiny beyond human understanding. How will you respond when that moment strikes you? Truly, nothing is more awe-inspiring than one who unceasingly pushes himself beyond the threshold of his courage and will. I had hoped to embody such an ideal myself. Even now, many decades later, my awe for her remains unwavering."
— Adol Christin
Preface to "Travelogue of the Gaete Sea"
Advertisement:

Ys VIII: Lacrimosa of Dana is the ninth primary installment of the Ys franchise, developed and published by Falcom. Initially released on the Sony PlayStation Vita in Japan on July 21, 2016, Ys VIII was ported to the Sony PlayStation 4 on May 25, 2017. NIS America, rather than long-time partner XSEED Games, published the localization, releasing it for North America on September 12, 2017 and on September 15, 2017 for Europe, coinciding with the franchise's 30th anniversary. A PC release was planned for the same date, but was delayed until April 16, 2018 due to a need for further code patching and re-work on the language localization. Further ports include the Nintendo Switch launched in June 2018, a Google Stadia version released on April 1, 2021 and a Sony PlayStation 5 announced for a fall 2022 release, also courtesy of NIS America. In 2019, Chinese developer Linekong and Falcom announced a Video Game Remake built from the ground-up for iOS and Android, featuring updated graphics, new character designs and a new character called Rucol; its release date is currently unknown.

An immediate Sequel to Ys V: Lost Kefin, Kingdom of Sand, series protagonist Adol Christin boards the Lombardia, a passenger ship taking him and traveling companion Dogi back to the Eresian mainland from the city of Xandria on the Afrocan continent. However, while passing through the mysterious Isle of Seiren, the ship is destroyed by a giant sea creature, stranding Adol, Dogi, the surviving crew of the Lombardia and its passengers on Seiren. Adol must cooperate with these "castaways" to survive on the island until they can find a means of escape. Throughout his stay on Seiren, Adol begins having dreams about a blue-haired woman called Dana Iclucia, who has a connection to Seiren from the distant past in the ancient Eternian civilization. These dreams slowly unravel the mysterious bond between the two, revealing there is more to the Isle of Seiren than meets the eye.

Continuing the party-based game-play from Ys SEVEN and Ys: Memories of Celceta, Ys VIII features a full three-dimensional world where players are encouraged to explore every nook and cranny of the Isle of Seiren. Featuring returning mechanics such as "Flash Guard" and "Flash Move", Ys VIII includes a new "Break" status, where-in enemies hit with attacks they are weak to causes them to become weak to all weapon attributes of piercing, slashing and striking. Furthermore, as the castaways are stranded on Seiren, players will help build a settlement and repel the island's hostile fauna in Beast Raids using Tower Defense elements. Finally, due to the narrative of Adol's dreams, the game will occasionally shift to Dana, who shares the headlining role with Adol in Ys VIII.