This page assumes you have played every Ys game up to this point, thus there will be spoilers for those games. You Have Been Warned. 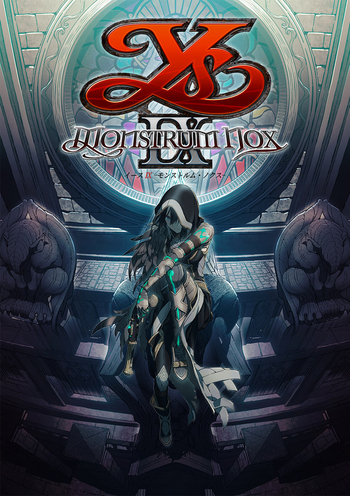 "Have you ever had a dream where you weren't you? You were someone else?
When I have a dream like that, it makes me wonder.
Am I really me? Perhaps such a dream is my reality. And my reality is the dream.
I discovered the answer during my adventures in Balduq. And the answer was astoundingly simple.
They are both equal truths.
What is real - is defined by what is not.
Who one is - is defined by who one isn't.
One must accept these truths, if they wish to live, and learn, and grow.
It was in this prison - this cradle -
where my dreams and my reality became intertwined."
— Adol Christin
An excerpt from "Balduq Prison"
Advertisement:

Ys IX: Monstrum Nox is the tenth primary installment of the Ys franchise, developed and published by Falcom. Originally released on September 26, 2019 in Japan for the PlayStation 4, it launched internationally for the same platform on February 2, 2021, published by NIS America, while the PC, Nintendo Switch and Google Stadia got their versions on July 6, 2021. Taking place after Ys SEVEN, Ys IX is set in the Prison City of Balduq, a major city located in the Gllia-Erdlingen region, which is a Romun province located on the northeast Esterior peninsula on the continent of Eresia. The main focus of the game surrounds the titular Monstrums, a group of people possessing supernatural abilities.

When series protagonist Adol Christin arrives at Balduq along with his traveling companion Dogi, he is apprehended by soldiers of the Romun Empire and thrown into prison for his actions from previous adventures. While escaping from the prison, he encounters a mysterious woman named Aprilis, who proceeds to grant him the ability to transform into a Monstrum. With his newfound identity as the Monstrum "Crimson King", Adol gets swept up in a plot that involves investigating the unrest behind Balduq and unknown entities behind the "Grimwald Nox".

Continuing the party-based game-play from Ys SEVEN, Ys: Memories of Celceta and Ys VIII: Lacrimosa of Dana, Ys IX features a full three-dimensional world where players are encouraged to explore every nook and cranny of Balduq. Combat remains largely the same with returning mechanics such as "Flash Guard", "Flash Move" and "Break", but the biggest change is the introduction of special Monstrum powers called "Gifts" which can be used for combat and exploration, on top of abilities that players already had access to in previous games. As Monstrums are tasked with protecting Balduq from demons called Lemures, players will occasionally participate in Grimwald Nox, which is nearly identical to Beast Raids from Ys VIII with Tower Defense elements. Also, since investigating Balduq is one of the goals of the game, Adol will form a guild and performs various jobs in exchange for information, gaining allies in the process, who serve similar purposes as the castaways from Ys VIII did.