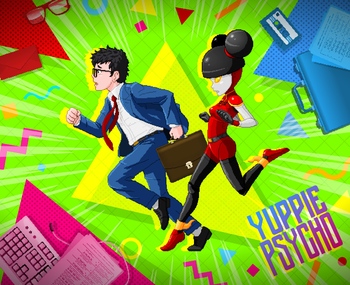 Today is Brian Pasternack's first day on the job at Sintracorp, one of the world's most prestigious and respected MegaCorps. Brian is quite a tad nervous, especially since his status as a Class G means that he's not exactly "wealthy" or "sophisticated" like the others at the company. But that's okay - with some help from his coworkers and a little bit of determination, Brian can easily tackle his first day on the job.

Unfortunately, his first task is to kill a nigh-immortal Witch haunting the company.

Yuppie Psycho is a business-themed survival horror game, released on April 25, 2019 by developer Baroque Decay, who also created The Count Lucanor. The story follows Brian as he makes his way through Sintracorp, which has transformed from a normal office building into an utter nightmare. Dodging mutant monsters, dangerous obstacles, and his incompetent coworkers, Brian must find and kill the Witch to fulfill his contract work all before home time. The gameplay is a top-down adventure game with strong puzzle elements - Brian must outwit his enemies rather than defeat them, and the game often places a lot of focus on using your head to solve puzzles.

The game is currently available on Nintendo Switch, Steam