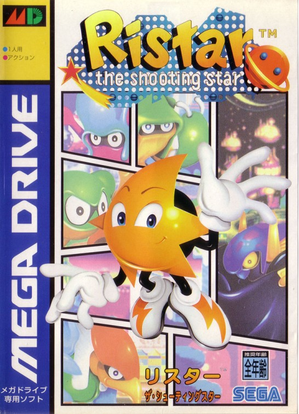 Ristar (known as Ristar the Shooting Star in Japanese) is a quirky little Sega platform game about a (literal) star-man on a mission to free his solar system from the clutches of a space pirate appropriately named Greedy. It boasts lush graphics that do as much as they possibly can with the Mega Drive/Genesis's capability, an excellent soundtrack, and innovative gameplay mechanics: Ristar has stretchy arms like rubber bands, and he uses these to perform a host of actions, including latching onto surfaces at any angle, slingshotting himself into enemies, and grabbing, swinging around, and flying off of poles. Ristar made an appearance on both the Sega Genesis and the Game Gear, as well being re-released for later platforms, such as the Wii Virtual Console.
Advertisement:

If that funny little yellow thing in the picture looks familiar, it should. Ristar derives from the same original character model (a kind of rabbit thing with prehensile ears) as Sonic the Hedgehog, before he became a hedgehog. If you pay attention to the game's art style and soundtrack, you can see some other similarities to the Sonic series besides the protagonist's appearance. Although this game never took off the way its estranged relative did (it didn't even get a sequel), it's still widely considered to be an excellent game and Ristar himself, while not as well-known as NiGHTS or Ulala, still makes an occasional cameo or two to this day, such as as the flagman in Sonic & All-Stars Racing Transformed.