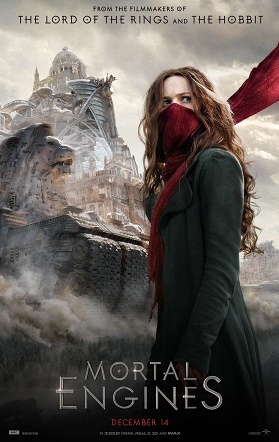 Mortal Engines is a 2018 post-apocalyptic adventure film based on the Steampunk novel of the same name by Philip Reeve. It is directed by Christian Rivers and co-written and produced by Peter Jackson. It stars Hera Hilmar, Robert Sheehan, Hugo Weaving and Stephen Lang.

In a post-apocalyptic world, entire cities have been mounted on wheels and motorised, and prey on one another. Tom Natsworthy (Sheehan), a sixteen-year-old Londoner, gets in the way of an attempt by the mysterious masked woman Hester Shaw (Hilmar) to kill Thaddeus Valentine (Weaving), a powerful man she blames for her mother's murder, and both Hester and Tom must fend for themselves.

Peter Jackson purchased the rights to the book in 2009, but the film languished for several years before being officially announced in 2016. Filming took place from April to July 2017 in New Zealand. The film had its world premiere on November 27, 2018 in London, was theatrically released in Australia and New Zealand on December 6, 2018 and in the United States on December 14, 2018.