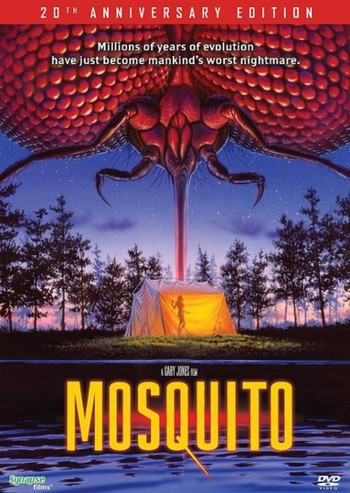 "If I wasn't having such a shitty day, I'd kill you right now."
— Earl
Advertisement:

Mosquito, also known as Blood Fever, is a 1995 film directed by Gray Jones. Staring Tim Lovelace as Ray, who is with his girlfriend, Rachel Loiselle as Megan, Ray's girlfriend, and a newly-hired Park Ranger, Steve Dixon as Doc Parks, a meteor chaser for the Air Force, Ron Asheton as Park Ranger Hendricks, and Gunnar Hansen, known for his role of Leatherface in The Texas Chainsaw Massacre, as Bank Robber Earl, this film features this unlikely group being forced to team up against mutant mosquitoes, which have fed on alien blood, and have grown to the size of dogs.

For a while, this film could only be found on Amazon for astronomical prices up to $400. However, with the release of the 20th anniversary edition, this Cult Classic in now easier to get a hold of, and watch.