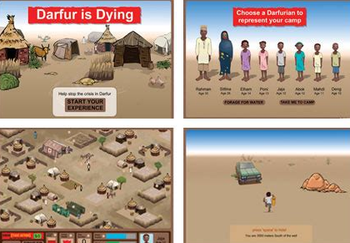 Darfur Is Dying is a 2006 "narrative based simulation" by a group of students for the Darfur Digital Activist Contest of mtvU, which it won. It can be found here

This Adobe Flash game allows the player to take on the roles of a Sudanese family living in Darfur, as well as managing the camp in which said family lives. The game's ultimate goal is to ensure that the village camp survives 7 days, while enduring attacks from Janjaweed militia. It was well received, with a good deal of coverage in international media.