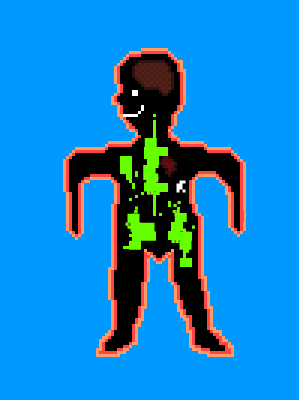 "I NEVER DESIRED WEALTH OR STATUS. ONLY EXISTENCE."
—The Protagonist, right before the level that decides his fate.
Advertisement:

Covetous is a Surreal Horror Indie Game. You play as some kind of parasitic creature (probably a fetus) living inside of your brother's body, eating him from the inside by moving over the green and yellow patches. You gradually get bigger and bigger the more you consume, and between each level the parasite narrates its story.

It's full of Nightmare Fuel and manages to be pretty creepy despite, or maybe even because of, its poor pixel graphics. It focuses little on actual gameplay (you just use the arrow keys to move and eat) and more on the story and theme of the game.

, though those with epilepsy should refrain from playing it thanks to the last level having some serious Epileptic Flashing Lights.