Film / They Shall Not Grow Old 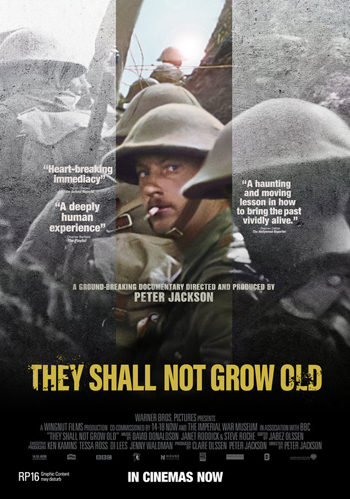 "Between 1914 and 1918, a global conflict changed the course of history. The people who experienced it did not live in a silent, black and white world."
—The film's trailer

They Shall Not Grow Old is a World War I documentary by Peter Jackson released in 2018 in commemoration of the centenary of the war's conclusion.

The film focuses on the common British soldiers' experiences rather than providing a detailed overview of the war. The visuals rely on archive footage that has been digitally restored and given colorization in an attempt to show the war as the soldiers saw it. Instead of traditional documentary-style narration by presenters or historians, the film only uses the recorded voices of numerous British veterans who were interviewed about their experiences. Sound effects and voice acting are also added to the war footage to provide an immersive experience.