Series / Why We Fight 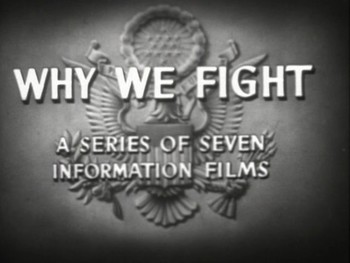 "No compromise is possible and the victory of the democracies can only be complete with the utter defeat of the war machines of Germany and Japan."
— George C. Marshall
Advertisement:

Why We Fight is a seven-part series of World War II documentaries directed by Frank Capra (of Mr. Smith Goes to Washington fame). Created during the war, they served the dual purpose of educating American troops about the enemy and the causes behind the war, and raising morale. The basic idea Capra had was that Nazi propaganda films like Triumph of the Will was so effective that he decided the best way to answer them was to take those films, and twist them in such a way as to use the Axis' own messages to support the Allies.

The films were quite effective, and were eventually released to the general public. The first, Prelude to War, received an Academy Award.

The films are still interesting today for different reasons. On one hand, they provide genuine and valuable lessons on the origins and progress of the war. On the other hand, the movies are also a good example of old-timey racism and wartime paranoia as a well as a classic historical example of film propaganda.

As works of the US government, the movies are in the public domain, and available online:

See also The Negro Soldier, a 43-minute documentary film produced by Capra, focusing on the role of black Americans in both the present war and America's previous military history.

Not to be confused with Euegene Jarecki's 2015 documentary feature about the US military-industrial complex.

Episodes with their own work pages: