Film / The Battle of Russia 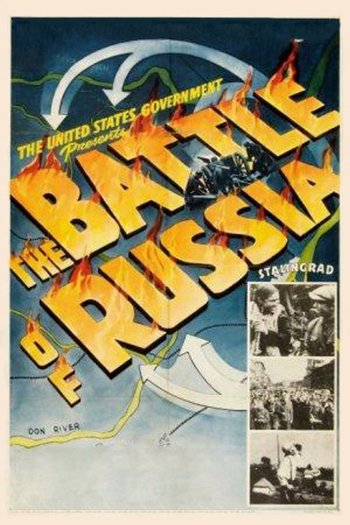 The Battle of Russia is a 1943 documentary feature directed by Frank Capra and Anatole Litvak.

It was the fifth film in Capra's seven-film Why We Fight series, examining the causes and history of World War II. This film, the longest in the series at 76 minutes (the others were an hour or less) recounts the entire Russo-German war as it had happened to that point. A thumbnail sketch of Russian history notes Russia's success in beating back European invaders, like the Swedes, Napoleon and the French, and, on several occasions dating back to the 13th century, the Germans.

The film goes on to sketch out a portrait of Russia as a nation, with its vast land area, its abundant natural resources, its coal and forests and fertile soil. Then it moves on to the German attack on Russia, the smashing German victories of the first six months of the war, and the Russian "defense in depth" that preserved the Soviet armies. The film ends with Soviet victory at the Battle of Stalingrad.