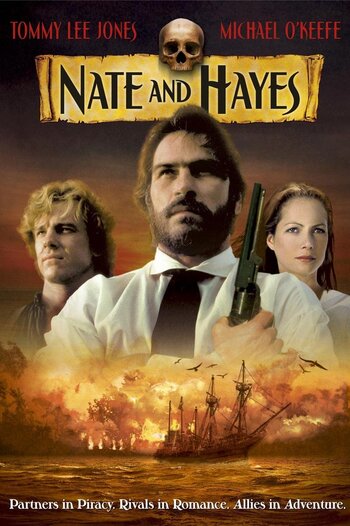 Nate and Hayes (also known as Savage Islands in Europe) is a Swashbuckler adventure film from the year 1983.

Set in the South Pacific during the late 1800's, the film centers on Pirate Captain Bully Hayes, who is caught by the authorities for dealing arms to islanders. In prison he retells the events that lead him there; 18 months before, he transferred two missionaries, Nathaniel "Nate" Williamson and his betrothed Sophie, to the Island of Wakaya. He took a liking to Sophie and accepted her offer to become business partners.

However, after Bully's departure, his Arch-Enemy Ben Pease, a "blackbirder" (slaver) who has been framing Bully for his crimes for years, attacks the island, taking its inhabitants for the slave-market and also kidnapping Sophie while he's at it. Nate teams up with Bully to get her back. While chasing Ben they run into Count Heinrich von Rittenberg, representative of Imperial Germany, who plans to start coal mines and anchoring points for the Empire with the help of Ben Pease's "merchandise."

The film stars Tommy Lee Jones as Bully Hayes, and it was partially written by John Hughes.