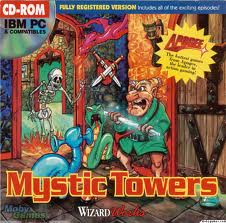 The game stars Baron Baldric, a geriatric wizard with a magic staff and an array of amusing mannerisms, who must quest through twelve towers and rid them of monsters.

Mystic Towers is a sequel to Baron Baldric: A Grave Overture, a platform game in which Baron Baldric battled his evil sorceror ancestor. The earlier game, originally written for the Amiga and later ported to the PC, was published by Manaccom and not released outside of Australia.