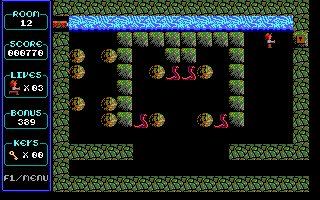 Paganitzu is a 2D Puzzle Game developed by Keith Schuler and published by Apogee Software in 1991. It follows the exploits of explorer Alabama Smith in the titular Aztec pyramid. The game is divided into three episodes:
Advertisement:

The basic story is as follows: Alabama Smith is a well-respected archaeologist until a tabloid newspaper runs a story accusing him of giving birth to twins. To restore his credibility, Al heads to Mexico, to the Aztec pyramid of Paganitzu (meaning "Temple of the Gods") to find the legendary Crystal Rose. This is covered in episode one.

In episode two, Al goes deeper into the pyramid to find the magical Silver Dagger, which he plans to use to defeat the evil Aztec deity Omigosh whom he accidentally released from the Crystal Rose at the end of episode one.

In episode three, Al (who is now a ghost after being killed by the Silver Dagger) can see that the pyramid is actually a living being of flesh and blood. He must find the Skull Oracle, who can send him back in time to find the Aztec wizard Devasco, the only person who can defeat Omigosh.

Paganitzu is actually the third game in a series, the first being the ultra-obscure Castle Zhagwar and the second the slightly-less-obscure Chaguniztu (which was published in the disk-based magazine Big Blue Disk by Softdisk, aka the company the id Software guys came from).