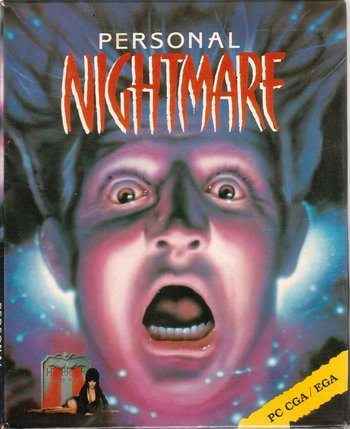 The original Horrorsoft game, Personal Nightmare is a turn-based First Person Adventure Game released in 1989. It is the precursor to the Elvira games and Waxworks (1992).

The game begins with the player character returning to his home village after receiving a letter from his father, the local pastor. Upon arriving, however, he finds the townsfolk are strangely hostile, and his father has simply vanished. He has to unravel the village's secret, find his father, and bring an end to his personal nightmare.

The actual game consists of exploring the village, gathering items so you can use them somewhere else, and interrogating people for hints and solutions. In order to finish your quest, you have to find the local “bad people” (manual’s words, people) and turn them in to the police. You also have to deal with three supernatural horrors (a vampire, a witch, and a hellhound), and finally deal with the Devil. (It would be a spoiler, except the intro pretty much gives it all away.)

The whole process is noticeably different from Horrorsoft’s later titles. For starters, it’s a combination of a parser and a mouse, in all that entails. It also runs on a timer; if you’re not in the right spot at the right time, or forget to grab something before a specific point, you’re screwed. (Later titles forgo the timer in favor of simply blocking access back.) This can make for a very frustrating experience, especially given the sheer number of things you have to do in each game day. There are also no RPG Elements; this is an Adventure Game through and through.

The DOS version is available from GOG.com. The Amiga version sports far superior graphics and sound, although both games are fairly identical. Unlike the Elvira/Waxworks games, Personal Nightmare has never been rereleased in any actual bundle.

This Game Contains Examples Of: