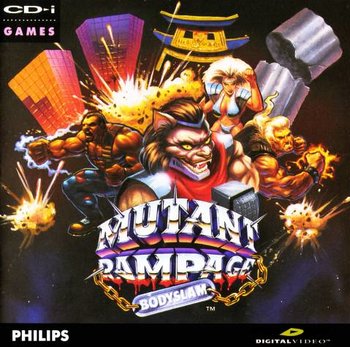 The year is 2068. Things have changed. The Millenium Wars ruined the World's cities. The Great Tremor Plague of 2017 reduced the population by a third. Radiation from the Thanatos Meltdown radically altered the gene pool. Technology advanced. Bioengineers have created Animal-Human hybrids. Athletes are commonly enhanced with bionics. The Cybernet, a fiber-optic communication network links everything. The rage of the Cybernet is Body Slam!
—Opening Narration

A Beat 'em Up made by Animation Magic for the Philips CD-i in 1994.

The story begin as a team unusually composed of pure-breed humans called the "Naturals" join the popular show Body Slam, hosted by L. Wolf Jam (often called "L. Wolf" in-game). This doesn't please current champion Hectro-Genocide, who vows to defeat the Naturals to prove his belief that humans are obsolete. The story is presented by interviews conducted by L. Wolf with Hectro-Genocide and the other teams between each fight.

Made by the same animators as I. M. Meen and the first two CD-i Legend of Zelda games, it features the same brand of deranged animated

and terrible acting, along with obnoxiously repetitive dialogue and ridiculous racial stereotypes.