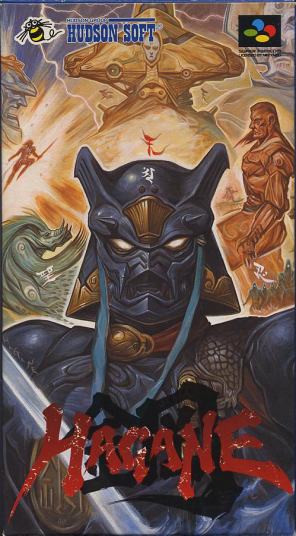 Hagane is a 1994 SNES / Super Famicom game by Hudson Soft and Red about a robotic ninja with a pair of ancestral statuettes for a power plant. He fights against a series of evil wizards and their many henchmen from a rival clan who want to destroy the world For the Evulz, apparently.
Advertisement:

Set in an alternate mystic-steampunk-ish dystopian Feudal Japan, Hagane was a ninja from the Fuma clan, which has long been at war with the Koma clan. Since ancient times the Fuma have been entrusted with the protection of a relic known as "Amano-Ikazuchi" (the Holy Grail in the English manual, for some reason), which holds the power to destroy the world. The Koma wanted to end the world, so they attacked and exterminated the Fuma, save for one man. Found at the brink of death by the mysterious monk Momochi, Hagane was turned into a cyborg whose only goal in life now is to stop the Koma.

Hagane is a very acrobatic character, able to do crazy spin jumps, backflips, somersaults and wall-jumps with total freedom. He's equipped with four distinct weapons: a katana to attack up-close, bombs and kunai for ranged attacks and a grappling hook to cling into ceilings. He's also capable of unleashing several different "ninpo" or ninja magic attack, which range from screen-clearing explosions to fire-engulfed flying kicks.

The gameplay is frequently compared to Shinobi due to the ammo-using weapons and because one of the stages involves trying out doors while enemies pop out of other doors, and to Strider (Arcade) for the acrobatics.

Despite having the same name and also being a robot, he shouldn't be confuse with another Hagane from Sengoku Ace series.