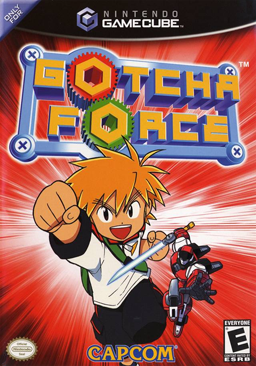 A boy and his Gotcha Borg.
"Now, give me your orders, GF commander!"
— G Red
Advertisement:

Gotcha Force is a video game developed and published by Capcom that was released exclusively for the Nintendo GameCube in Japan on November 2, 2003, North America on December 3, 2003, and PAL regions on February 20, 2004. The premise is based loosely upon toy fights that children have and "gashapon"note capsule toys, usually from coin-operated machines, with gameplay derived heavily from Virtual-ON.

Kou has just moved to Safaritown, and on a starry night, he observes a meteor shower. It turns out that these aren't meteors, but toy-sized alien robots from another planet, called Gotcha Borgs. One in particular, G Red, finds Kou and explains that an evil force of these toy robots called the Death Force, led by the Galactic Emperor, is out to destroy Earth as they destroyed the Gotcha Borgs' home planet of Mega Borg, and the only hope for Earth is for kids to team up with the heroic robots and form the Gotcha Force.

One of the main draws towards this game is that you can build a small team of borgs that you can bring to any battle — when one borg goes down, the next in the squad takes its place. Moreover, borgs can also gain levels, increasing their durability and, for certain borgs, ammo capacity. Finally, another main draw to the game is that there are over 200 borgs to collect, each with their own fighting style, thus allowing for a great deal of diversity and strategy for teams (and if you have the resources, nothing prevents anyone from using multiple copies of the same borg).

The designs of the borgs are heavily Troperiffic, taking inspiration from a variety of sources and distilling all the delicious tropes into one package, ranging from ninjas, cowboys, samurai, knights, tanks, mecha infantry, transforming mecha, jet planes, dark monsters, tokusatsu heroes, dragons, and so much more!

In 2012, Capcom Japan decided to do a limited reprint of the game

, even offering a "Special Selection" edition with an included art book. The announcement was met with equal parts confusion and joy, as while many fans were mystified as to what motivated Capcom to suddenly reissue such a niche title, just as many were happy to see Capcom acknowledge the property at all so long after its release.